“The seven community colleges of New Hampshire and the students who go there are an essential part of what this state will be into the future,” said Holloway as he accepted the award Thursday night. Holloway served as chairman of the Community College System of New Hampshire Board of Trustees since 2005, after joining the board in 2003. He remains on the board providing stewardship, oversight and advocacy for the seven-college system.

“We have generations of people who have found opportunity to succeed because of the great work of Walter Peterson and Paul Holloway,” said U.S. Senator Jeanne Shaheen, former NH governor. Shaheen cited Holloway’s efforts to connect the automotive industry with educational programs throughout the state. “Paul has made New Hampshire a better place both by what he has accomplished and who he is.”

Holloway is an entrepreneur who began his career in the automotive industry as a district manager of Buick Motor Division. In 1967, he invested everything in a Buick-Pontiac dealership in Exeter, which then became one of the largest dealerships in the state as Dreher-Holloway. His service, advocacy and influence has benefitted countless charitable endeavors over several decades. He and his wife, Anna Grace, have created opportunities for students to succeed, entrepreneurs to thrive and have been committed to building stronger communities across the state.

“You’re a strong leader for New Hampshire, you’re someone who makes a difference,” Former NH Governor Craig Benson said while addressing Holloway. Benson said he encouraged Holloway to join the CCSNH board years ago after Holloway pointed out the need for more industry-aligned educational programming in the state.  Benson urged those in the audience to support NH’s community colleges by means of private and corporate philanthropy through The Foundation for New Hampshire Community Colleges.

Current CCSNH Board of Trustees Chairman Jeremy Hitchcock praised Holloway’s dedication, and reiterated the importance of the community college system. “Ninety-three percent of our students are from New Hampshire, and so many of our students stay in the state to work.”

One example is Lakes Region Community College professor Jamie Decato, who graduated from the GM program, worked in the industry, and now serves as a full-time faculty member teaching new generations of skilled technicians. Decato said he discovered his love of teaching with LRCC, “There’s no greater satisfaction to me than seeing graduates buying houses, raising families, and mentoring students.”

New Hampshire Automobile Dealers Association President Pete McNamara credited Holloway for his work getting business and industry leaders involved in automotive training programs in the state.  “We have 20 high school programs nationally certified, and programs at five of the community colleges.”

The Water R. Peterson Award recognizes individuals who reflect the late Governor’s values, his legacy of public service and commitment to higher education. Peterson served as the Governor of New Hampshire from 1969 to 1973 and remained a strong supporter of higher education throughout his life, including serving as a trustee of the Community College System of New Hampshire.

Nashua Community College President Lucille Jordan read a quote by Gov. Peterson in an April 30, 1971 special feature of The Telegraph on the then-brand new college, “‘Graduates of the two-year college will be prepared for immediate and rewarding employment within our state and, in many instances, within commuting distance of home. The college will provide an excellent low-cost higher education opportunity to the high school graduate.’” Jordan said the goals still hold true today.  “Paul Holloway has kept Walter’s vision alive through his service and commitment to the Community College System of New Hampshire.”

Peterson’s son, Andrew Peterson, described the state’s community colleges as “a bridge to the future for so many” as he presented the award to Holloway. “Paul Holloway and Anna Grace are New Hampshire treasures. It’s an honor to present this award with the memory of my father in mind.” Peterson was joined on stage by his daughter Anna Cole. 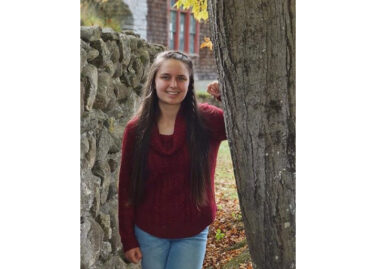